$660.00
*Availability may change without notice due to high demand Australia wide during COVID-19. Please call us on 03 99311160 to confirm stock before purchase, or we can pre-order for you if needed.

Notify me when back in stock

The SS79HPD Toyota 70 Series Land Cruiser 4x4 Snorkel is designed to deliver up to 50% more air than the OE air intake for Toyota Land Cruiser engines.

With the popularity of performance upgrades using engine management and larger exhausts, Safari 4x4 Engineering took the decision to design a snorkel system that not only raised the air intake to prevent ingesting harmful elements to the vehicles air cleaner, but also would be able to deliver the necessary volume of air into the engine, therefore maximising the performance enhancements potential.

Huge air flow is but one aspect of the ultimate in snorkel Toyota Land Cruiser design. The Safari ARMAX snorkel air ram is designed to perform two very important roles. The most obvious is to funnel cool clean air into the snorkel body - but just as importantly, the Safari ARMAX air ram acts as a highly efficient water separator to remove rain water from the incoming air stream - thus ensuring safe engine operation through even the most torrential tropical storms.

Diesel engines function in a completely opposite manner to Gasoline engines.

That is to say, RICHER fuel/air ratios, (more fuel) results in a diesel engine running HOTTER and producing MORE power.

As a consequence of the above, contrary to assertions from many CHIP suppliers, it is fundamentally impossible to simultaneously offer substantially increased power from a diesel engine, directly coupled with improved fuel consumption, purely by installation of a CHIP.

However, fuel consumption CAN be improved by simultaneously installing other components such as improved flow air entry and exhaust systems, thus increasing engine efficiency.

A well designed, manufactured and correctly CALIBRATED ECU ( Engine Control Unit, not merely a CHIP), CAN offer substantial increases in power. Typically 25% by installation of the ECU alone and upwards of 50 to 60% over standard, when coupled with appropriately matched additional components. In some cases, these additional components may also result in improved fuel consumption under light load, or cruise conditions.

More From This Category 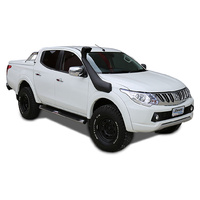